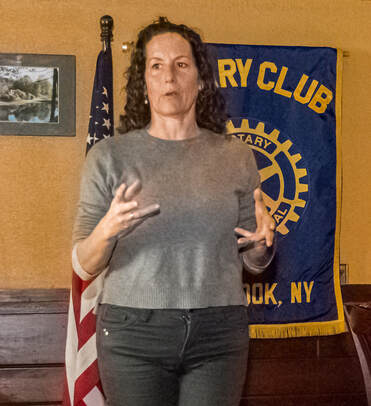 The MARC Foundation’s 2020 Community Leadership Award goes to Cara Mia Bacchiochi for Hope on a Mission (HOAM), a street ministry she founded in 2015 to serve homeless or addicted residents of Poughkeepsie. Every Saturday Cara Mia and teams of helpers are on the corner of South Clinton & Main in Poughkeepsie, providing a hot meal, hope, love, prayer, clothing, food, and personal-care items. The mission began with restoring dignity to homeless, addicted women of the streets through relationships of unconditional love, but has expanded to all persons experiencing homelessness, addiction or both.   Additionally, HOAM began serving a Saturday morning meal at 8:30 on the very same corner.

CaraMia was born in Manhattan, but was raised in Connecticut. After graduating from high school, she came to Poughkeepsie to attend secretarial school. She brought with her the familial coping skill of alcohol and drug use.  CaraMia quickly learned how much easier the party life was in city life and began a downward spiral into cocaine addiction.  Soon jobs weren't paying enough to keep her from facing her painful reality and she began shoplifting to sustain her habit and numb the pain.  It wasn't long before she was homeless, in and out of jail, and living in abandoned buildings, on kind people's sofas or in the streets until she'd had enough and wanted more for her life.  She signed herself into the psychiatric emergency room St Francis Hospital in October of 1990. From there she was remanded by the courts and probation to long-term treatment near Ithaca, New York where she spent five months in intensive inpatient program. Once CaraMia returned to Poughkeepsie, she volunteered, then worked for ARCS-AIDS Related Community Services, a nonprofit agency helping persons with HIV positive diagnosis and addiction problems. Many of the people she had used drugs with had contracted HIV and were now her clients. This fueled her passion to help.

CaraMia got married in 1993 and shared a home in Hyde Park.  They had three children in five years and CaraMia enjoyed stay-at-home parenting until the children were all school-aged. It was at this point when CaraMia began to wonder what was next.

She started school at Dutchess Community College and was a very successful general education student. She eventually joined the nursing and the American sign language curriculums. Soon, the stresses of motherhood, marriage, and education were stretching her thin and her home life was beginning to fall apart. Alcohol then re-entered her life . The downward spiral happened very quickly — CaraMia began drinking regularly, going out to bars and driving home intoxicated. She divorced her husband, got two DWAIs in six months, dropped out of school, lost her driving privileges twice and found a new man who drank and partied like she wanted to. The descent into the abyss of addiction accelerated and within four years, CaraMia was back in jail for the first time since 1990. She was once again remanded to long-term, inpatient treatment. This time she learned the purpose of her journey.

After 20 months of intensive in- and out-patient treatment, she was able to return to college, finish her degree in two semesters and graduate with an associate's degree in humanities. But it was while she was away at St Joseph's Addiction Recovery Treatment Center that she was divinely inspired to begin a Street ministry to serve women just like herself.  Her message was to give hope to those who struggle and Hope On A Mission was born. Beginning with a prayer group of 60 women, a case of water and some old flip-flops, CaraMia sat on the bumper of a borrowed car and offered a bottled water to any woman who walked by, engaging her in conversation and compassionately sharing her story of redemption and and a loving God.  CaraMia also became a Certified Addiction Recovery Coach and Peer Advocate, and worked for a year under a grant at The Council on Addiction, Prevention and Education coaching recoverees in Eastern Dutchess on their journeys to wellness.